by Ed Hindson and Thomas Ice 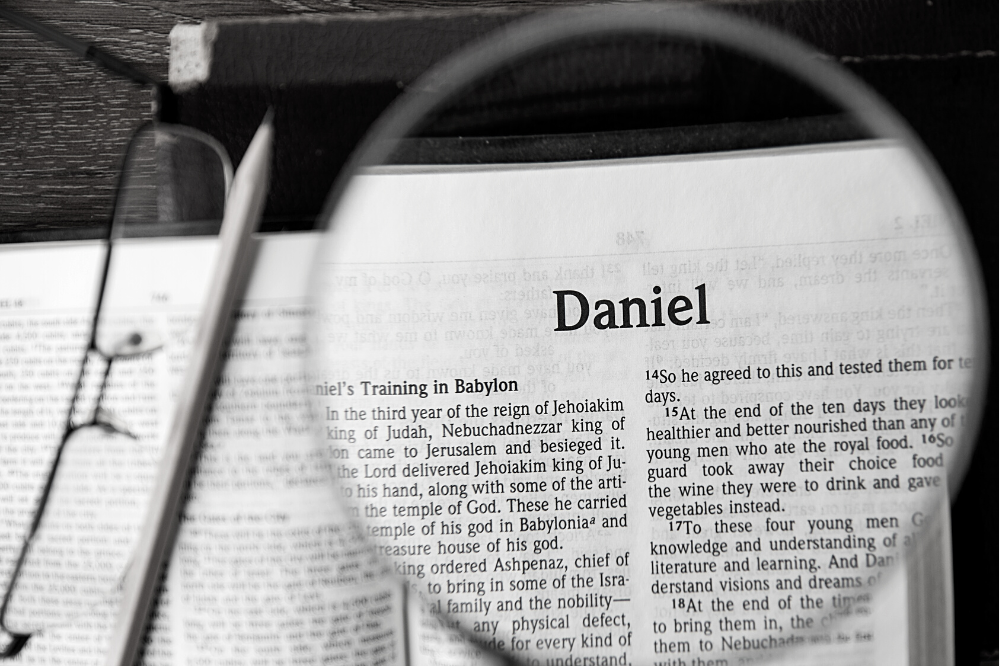 Daniel is one of the most important books of the Bible with regard to the chronology of future events because it provides a great amount of key information about the players and time sequences of end-time prophecy. Daniel introduced much of what the New Testament book of Revelation accepted and expanded upon. Thus, Daniel is the fountainhead out of which springs the major themes of Bible prophecy. It is impossible to understand prophecy and biblical chronology without looking to the book of Daniel.

In Daniel we find graphic visions that provide an outline of what God would do from the sixth century BC—when Daniel lived and wrote—until the coming of Messiah’s kingdom in the Millennium. The key prophetic and chronological chapters are Daniel 2, 7, 9, 11, and 12. And chapters 2, 7, and 9 provide broad outlines for Jewish and Gentile history.

While the nation of Israel was captive in Babylon, God provided Daniel and the people with an outline and chronological framework for their history. He did this to give them hope and to confirm that He had a plan for their future.

More specifically, Daniel chapters 2 and 7 provide a panoramic overview of four Gentile kingdoms that would play important roles in world history. The first of the four kingdoms was Babylon, under whose jurisdiction Daniel saw and wrote many of his prophetic visions. The other kingdoms were Medo-Persia, Greece, and Rome.

Daniel concluded these overviews by saying that the lands that made up the former Roman Empire would undergo a revival in the form of a ten-nation confederacy immediately before the coming of Messiah’s kingdom. Daniel 2 presents these kingdoms from a Gentile perspective, while Daniel 7 presents them from God’s perspective, which explains why the kingdoms are characterized as beasts. When man’s fallen sinful nature is not restrained, especially when placed in a position of rule over other people, then it manifests itself as having the characteristics of a wild animal that is out of control.

Daniel chapters 11 and 12 also provide information that’s essential for understanding Bible prophecy. For example, Daniel 11 gives many details relating to the Antichrist. Daniel 12 provides further chronological details about the Tribulation and lets us know that there will be an interval of 75 days between Christ’s second coming and the beginning of the Millennium.

Central to Daniel’s prophetic visions are the four Gentile kingdoms that appear as different parts of a statue in Daniel 2 and as different kinds of beasts in Daniel 7. These four entities make up various kingdoms of man, which are all set in opposition to God’s kingdom.

The four kingdoms are first revealed in Daniel 2:29-35. There, we read about a dream Nebuchadnezzar had, in which he saw a large statue of a man whose body parts were comprised of different metals. The head was of gold, the chest area and arms were of silver, the hips and thighs were made of bronze, the legs were made of iron, and the feet were comprised of part iron and part baked clay. In verses 36-45, Daniel explained the meaning of this dream to Nebuchadnezzar. He pointed out that history would be dominated by four powerful Gentile kingdoms that would rule the world until they were destroyed by the fifth and final kingdom, God’s kingdom involving national Israel. This period of Gentile domination, which started with the rise of Babylon in 612 BC, is called “the times of the Gentiles” (Luke 21:24).

Here are some specifics about the four kingdoms as revealed in Daniel chapters 2 and 7:

The book of Revelation builds upon the prophetic details given in Daniel and further develops the final phase of the fourth kingdom, or Antichrist’s rule. Dr. John Walvoord made this observation:

The minute description given here of the end time, the fourth beast, and the ten horns followed by the eleventh horn that gained control of three has never been fulfilled in history. Some expositors have attempted to find ten kings of the past and the eleventh king who would arise to somehow fulfill this prophecy, but there is nothing corresponding to this in the history of the Roman Empire. The ten horns do not reign one after the other, but they reign simultaneously. Further, they were not the world empire, but they were the forerunner to the little horn which after subduing three of the ten horns will go on to become a world ruler (v. 23; Revelation 13:7).1

The Antichrist will rise up within the revived Roman Empire, or a ten-nation confederacy in Europe, and eventually he will establish a one-world government.

Daniel 9:24-27 is one of the most chronologically important passages in the Bible. The prophecy in this passage predicts the very day when the Messiah would ride into Jerusalem on a donkey in an event known as “the Triumphal Entry” (Luke 19:41-44). With this appearance, Christ fulfilled the first 69 weeks of years, or 483 years (Daniel 9:26), in this prophecy. The final week of years, or 7 years, will be fulfilled with the arrival of the Tribulation (Daniel 9:27). 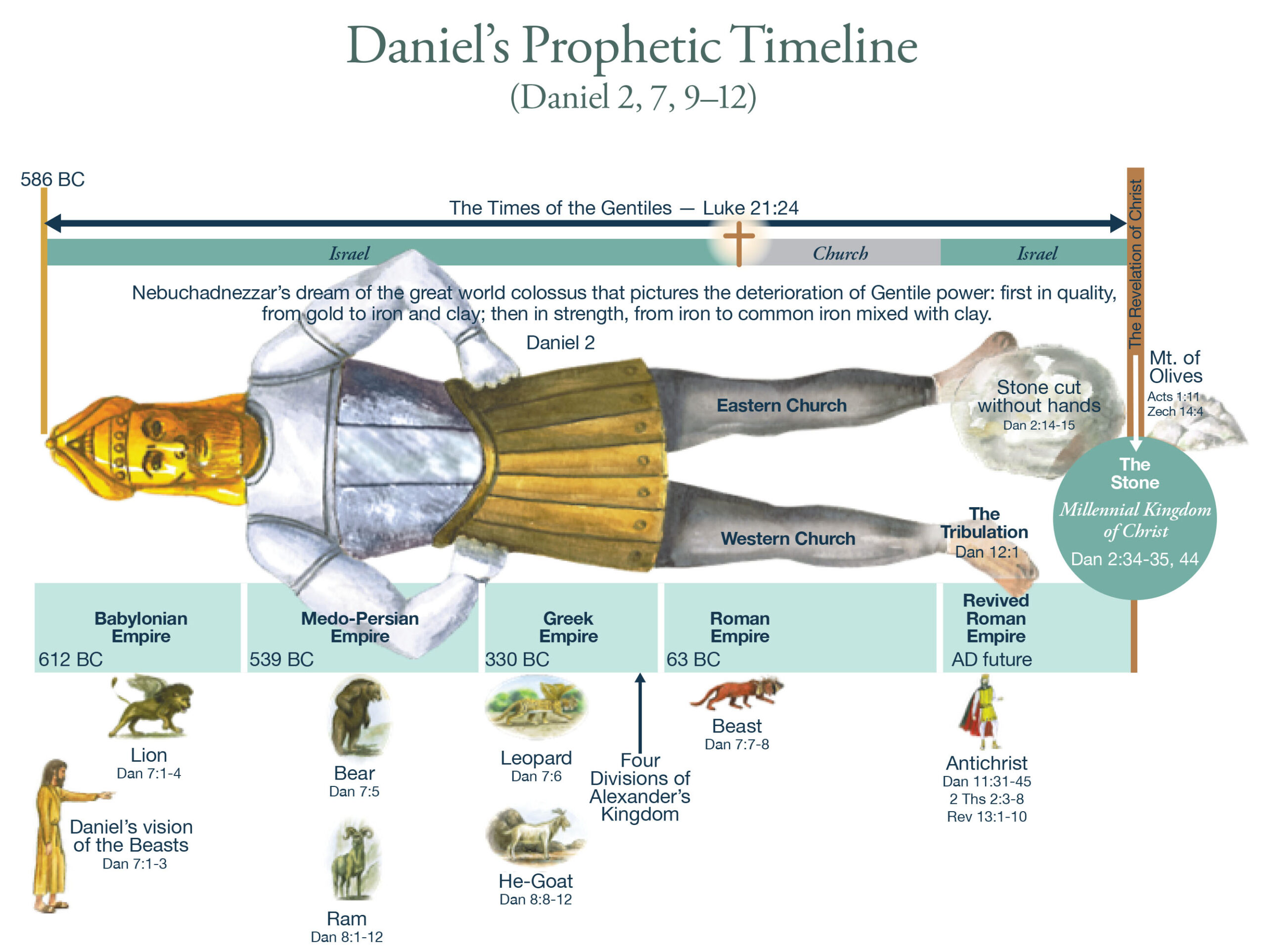