In God we trust? 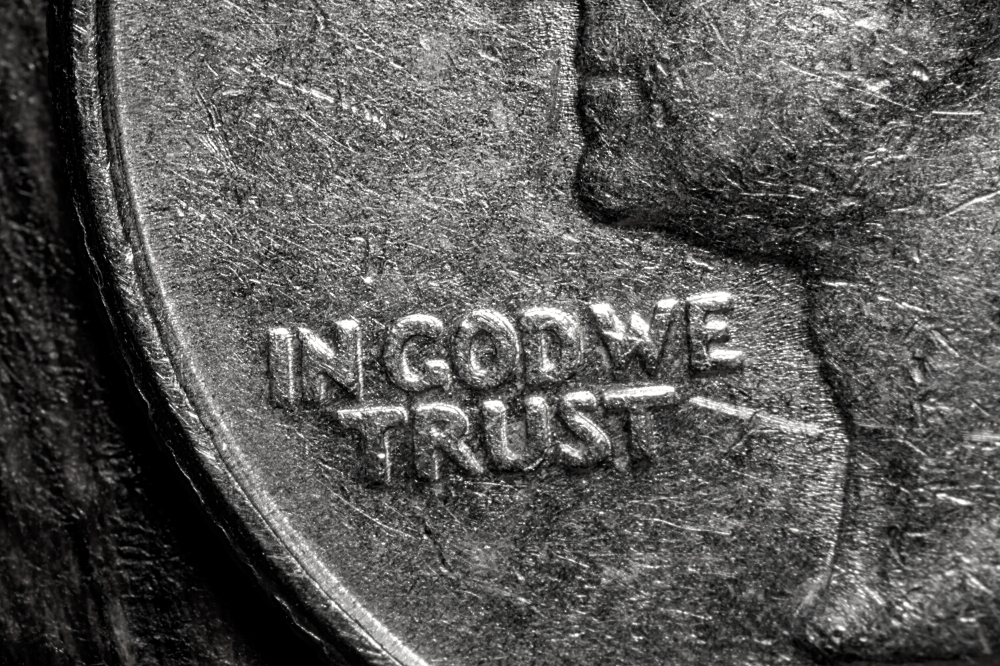 Though we in America have never suffered under regimes like Nero’s or Nazi Germany’s, and centuries have passed since we resisted and cast off England’s tyranny, we are now seeing more governing authorities systematically reflect the spirit of the coming age.

And this we know: In the not-too-distant future, Christians worldwide will be required once again to bow the knee to a new Caesar—Antichrist. In Revelation 20:4, we read,

I saw thrones, and they sat on them, and judgment was given to them. And I saw the souls of those who had been beheaded because of their testimony of Jesus and because of the word of God, and those who had not worshiped the beast or his image, and had not received the mark on their forehead and on their hand; and they came to life and reigned with Christ for a thousand years.

From the first century to this one, believers in various places across the world have been mistreated, hated, marginalized, persecuted, and killed. As I write this, the active persecution of believers by governments and radical Muslims is occurring in some 150 countries, with estimates of anywhere from 10,000 to 90,000 dying per year because of their faith in Jesus. But as horrific as those statistics are, they’re nothing compared to the future slaughter of those who will turn to faith in Christ during the great tribulation. The price they pay then will be in blood, and predominantly through barbaric beheading.

Governments are not divine, but they are divinely appointed. And perhaps no nation has better exemplified the fundamental ideals of what a government should be like than the United States of America. Without question, we in America have historically been blessed with unprecedented freedoms through the recognition of our basic God-given rights. We are a privileged people.

But in recent decades, we have seen the gradual deterioration of the underpinnings upon which our country was founded. This is not surprising, as humanity naturally tilts towards depravity and self-ruin. But Satan is also pushing an end-times agenda, and he’s using the government to achieve his goals. Through a growing sentiment toward a one-world government, along with a deceptively alluring submission to federal mandates, we are simultaneously sliding toward Sodom while also accelerating into the era of Antichrist.

Admittedly, there are very good people in our government at every level and in every branch and department. These are men and women who have sworn allegiance not only on a Bible but to the principles found within it. However, the evil forces present in this current darkness are also fighting with unrivaled zeal and passion to achieve their godless, immoral agenda. This is not only true of far-left liberal politicians who are determined to eradicate the Judeo-Christian values upon which our government was founded, but also applies to a growing revolutionary anarchist movement that, sadly, is not going away.

Moving forward, we should anticipate an increasingly greater decay of basic decency and morality in the realm of politics, which, being translated, means any Christian or conservative candidate or appointee will be brutally opposed and vilified in an effort to keep him or her from holding public office.

This highlights a critically important distinction between government and the church. In recent history, ever since the Reagan administration, Christians in America have tended to overinflate the role and importance of the office of president in terms of influencing the nation’s moral compass. In some instances, the church has even abdicated her role in upholding a positive moral climate in our country, relying instead on conservative governing authorities to do that work for us.

But as Christians, we must regularly remind ourselves that it is the church, not government, that is responsible for having a positive moral influence on culture and restraining evil. When we put our trust in leaders who are sympathetic to Christian beliefs, we often relax, back off, and hand the reins to them.

However, God never said of government, “You are the light of the world.” Instead, He said that of you and me (Matthew 5:14). He never described government as being “the pillar in support of the truth,” but Scripture portrays the church in this way (1 Timothy 3:15). Regrettably, Christians can end up becoming more concerned about losing elections than losing souls. Until the church recognizes that no president or administration can or will save us, we will continue to lose the battle for the soul of America.

A Christian-friendly leader, or any other government official sympathetic to Judeo-Christian values, is a welcomed blessing, but he or she can only wage a political or legal war against the forces of satanically inspired evil—those forces that seek to destroy babies in the womb, promote immoral lifestyles through legislation, redefine marriage, and grow government and its power into a multiheaded hellish hydra. Yes, we should strongly support candidates who promote righteousness and vehemently denounce those who argue on behalf of evil, murder, and immorality. It is our civic duty to cast a vote for righteousness and righteous political platforms, regardless of how imperfect a given candidate may be personally. But our government has never led a single person to Jesus Christ or changed their eternal destiny. Only the gospel can do that as believers penetrate their culture with the good news of Jesus.

Regardless of how good or effective human government is, it still has no real bearing on God’s eternal kingdom. In that sense, it really doesn’t matter who is president or Caesar. Christianity began, and flourished, under one of the most godless, pagan regimes the world has ever known. And according to the prophet Isaiah, ultimately, politics and presidents are irrelevant in the grand scheme of God’s prophetic program (Isaiah 40:23-25). Government does affect our lives, but it does not and cannot hinder the gospel, for the Word of God is not imprisoned (2 Timothy 2:9). And the kingdom agenda we preach and promote “is not of this world” (   John 18:36).