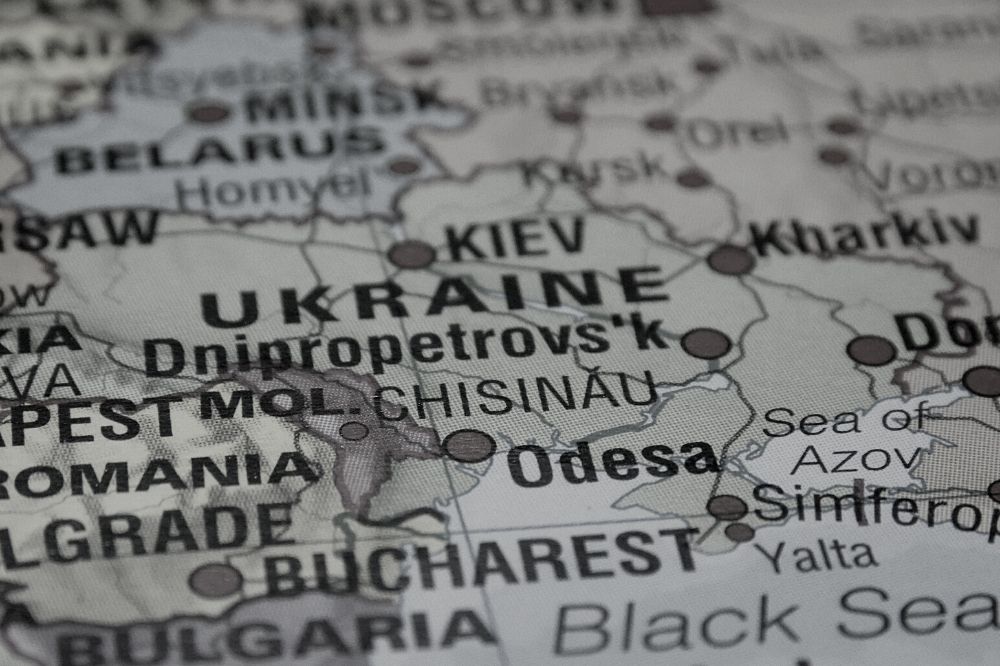 That’s the question many Christians are asking now.

On February 24, 2022, President Vladimir Putin of Russia unleashed a massive military attack against Ukraine, with armed forces invading the country from three sides. Speaking on Russian state television, Putin claimed his goal was “to protect people who have been subjected to bullying and genocide…And for this we will strive for the demilitarization and denazification of Ukraine.” He also warned that any attempt by other nations to interfere would be met by “consequences you have never seen.”[1]

In the months leading up to the invasion, Putin repeatedly alleged that ethnic Russian civilians who lived in eastern Ukraine faced anti-Russian hostility and needed protection. Ukrainian officials persistently denied the accusations, and just hours before the attack, President Volodymyr Zelenskyy pleaded that “the people of Ukraine and the government of Ukraine want peace.”[2]

Before we look at whether this war has prophetic significance, let’s gain a clearer understanding of what’s happening by asking this question first: What does Russia want?

What Does Russia Want?

Putin has made no secret of the fact he longs to restore the Russian empire to its former glory. During 1988–1991, the once-powerful Soviet Union experienced internal political and economic strife that led to its collapse and the creation of 15 separate republics.

Putin has since described this breakup as a “great geopolitical catastrophe of the twentieth century.” In an interview on June 21, 2020, he said the departed republics “left the USSR in 1991 together with ‘a huge amount of traditionally historically Russian land.’ ”[3] In saying this, Putin was essentially asserting that these lands rightfully belong to Russia.

Putin has also said that the dissolution of the Soviet Union led to the fragmentation of the Russian people. In July 2021, he wrote a 5,000-word discourse titled “On the Historical Unity of Russians and Ukrainians.” He said that after the 1991 breakup, Russians “found themselves abroad overnight, taken away, this time indeed, from their historical motherland.”[4] He was referring to the fact that when the republics broke away from Russia, millions of ethnic Russians found themselves separated from their homeland, including several million who live in Ukraine.

In words that appear to foreshadow the invasion, Putin went on to describe Russia and Ukraine as “one people, a single whole,” and urged that Ukraine should return to “partnership with Russia.” The facts that Ukraine was formerly part of Russia for three centuries and that Russians have long called Ukraine Malorossiya, or “Little Russia,” have also been used to justify pressuring Ukraine to return to Russian sovereignty.

During his two decades of leadership, Putin has promoted the concept of what is called the “Russian World” doctrine—the idea that “no matter where Russians are in the world, the Russian state has a right and an obligation to protect and defend them.”[5] This was his justification for the controversial annexation of Crimea in 2014, and now, it is his excuse for sending troops into Ukraine. It also explains why other former Soviet republics are becoming more nervous than ever about Russia’s intentions for them.

Another reason for Putin’s actions is that he wants to create a buffer zone between Russia and the European member nations of NATO (North Atlantic Treaty Organization), a Western alliance that he contends is a military and nuclear threat to Russia. He has long demanded that the former Soviet states, including Ukraine, not join NATO lest they gain access to military assistance and weapons that would make it much more difficult for him to reclaim the former republics. Two months before invading Ukraine, “Russia said…it wanted a legally binding guarantee that NATO would give up any military activity in Eastern Europe and Ukraine.”[6] Putin wants to prevent any possibility that US nuclear weapons might be placed in Eastern Europe, for that would make it harder for Russia to carry out its expansionist ambitions.

In all of this, Putin’s desires are to reverse the effects of the Soviet breakup, reestablish Russia’s preeminence in global affairs, and push back against Western alliances that allegedly pose a threat to its interests.

Is the Invasion of Ukraine Prophetically Significant?

The answer to this question is twofold: In an indirect sense, Russia’s attack is significant. But in a direct sense, it is not.

Let’s look at the direct sense first. There is nothing in Scripture that prophesies or even hints at this attack. None of the Bible’s mentions of Russia describe the crisis taking place in Ukraine. This war doesn’t have anything to do with the tribulation or any specific end-times prophecies. While there is no doubt that we are drawing closer than ever to the last days, this isn’t a last-days event.

But indirectly, Russia’s power move is consistent with the belligerent Russia we read about in Ezekiel 38–39. Nearly 2,600 years ago, the prophet Ezekiel declared that “Magog” and “Rosh” (Ezekiel 38:2 NKJV) would be among the foreign invaders who launch an attack on Israel at some point in the future. Prophecy scholars have identified “Magog” as southern Russia, and “Rosh” as Russia.[7]

Ezekiel 38:2-6 lists the nations that will participate in this massive military coalition created for the purpose of destroying Israel—they include Russia, Iran, Turkey, Sudan, Libya, and others. We know this prophecy is still future because these countries have never formed an alliance before, nor have they ever attacked Israel as a group.

Russia’s stature as a military superpower makes it likely that it will be the nation that spearheads this invasion. The fact that Russia is becoming more militarily aggressive on the world stage today is consistent with Ezekiel’s future description of Russia as an aggressor nation. Thus, Russia’s attack on Ukraine may be one of perhaps several stepping-stones toward what is to come.

If it turns out that Russia does conquer Ukraine, then it’s likely that soldiers from Ukraine could be numbered among the forces that, at some future date, come against Israel. Even if that does happen, all it means is that the current war between Russia and Ukraine has prophetic stage-setting implications, and it doesn’t make the war an actual part of any prophecies in the Bible, including those in Ezekiel 38–39.

Where Does Russia Fit into the Prophetic Picture?

This raises an important point: In recent years, Russia has already been engaged in military actions that do have major prophetic significance—in Syria, which shares a northern border with Israel. Putin is good friends with President Bashar al-Assad of Syria and has provided significant armed support for al-Assad during the Syrian civil war. Russia’s intervention was successful enough that in 2017, Syria agreed to provide Russia with permanent access to a key air base as well as to its naval facility in Tartus, which means Russian warships can now be stationed in a Mediterranean seaport.[8] These developments give Russia dangerously close access to Israel.

So Russia—one of the invading nations listed in Ezekiel 38—has already established a strong military foothold immediately north of Israel. When it comes to Bible prophecy and the end times, we need to pay careful attention to Russia’s presence in Syria. As tensions in the region escalate and members of the Ezekiel 38 coalition become more and more connected, we can know we are drawing ever closer to the fulfillment of the prophecies in Ezekiel 38–39.

What Should We Do Now?

It is reported that in the days and weeks to come, as many as four million Ukrainians will flee to the neighboring countries of Poland, Moldova, Hungary, Romania, and Slovakia. Many are walking for miles to escape, and border crossings are so backed up that people in trains, cars, and buses have had long waits of as many as 20 hours or more. Countless other Ukrainians have been displaced from their homes and lack water and food supplies. All of this is taking place in hostile winter conditions, which makes people’s attempts to survive and escape much more hazardous.

Our Christian brothers and sisters in Ukraine are in dire need of prayer and support. We need to pray that in the middle of all the fear, chaos, and suffering, they can be a voice of hope—hope that is found only in Christ. We should pray that believers will be diligent to encourage and care for one another, and that they, in turn, can be a gospel testimony and offer tangible help to unbelievers who need God.

Pray especially for pastors and missionaries who are working tirelessly around the clock to meet people’s needs, both physical and spiritual. Pray as well that this tragic conflict would quickly come to an end so that more lives aren’t lost and that, with the restoration of peace, people can once again bring stability and order to their lives.

From our limited and imperfect human perspective, we’ll never understand why God allows horrific evils such as war to cause so much devastation and suffering. But we can rest confident in the Bible’s declaration that no matter what humans do, God is still in control. As Proverbs 19:21 says, “Many are the plans in a person’s heart, but it is the Lord’s purpose that prevails.”

Another truth that is a wonderful source of comfort is this: There is no human calamity so great that it can sever the Lord’s people from His love for them and threaten their salvation and everything that comes with it, including eternal life. The apostle Paul asks, “Who shall separate us from the love of Christ? Shall tribulation, or distress, or persecution, or famine, or nakedness, or danger, or sword?” (Romans 8:35). Every one of these hardships is being experienced right now by our brethren in Ukraine, and the exceeding greatness of Christ’s love ensures that no circumstance they face will separate them from Him and deprive them of the spiritual blessings that are theirs now and in heaven.

God is at work in people’s hearts and lives not only in Ukraine but worldwide to accomplish His sovereign will and extend His love to those who would receive it. And all Christians—including those in Ukraine—can place their hope in this: No matter how severe the crisis we face, God controls the outcome, and nothing can take us from His hand.

Note: Perhaps your church supports missionaries or a mission organization with workers in Ukraine, and you can inquire about specific ways to pray or offer help. Or if you would like to find out more about trustworthy and biblical ministries with a presence in Ukraine and the neighboring country of Poland, you can go to https://www.gracechurch.org/outreach/posts/2356 and https://www.foi.org/message-from-jim/.

[1] This address was presented on national television from Moscow on February 24, 2022, and made available via the Russian Presidential Press Service.

[4] Angela Stent, “The Putin Doctrine: A Move on Ukraine Has Always Been Part of the Plan,” Foreign Affairs, January 27, 2022, https://www.foreignaffairs.com/articles/ukraine/2022-01-27/putin-doctrine.

[5] Jacob Lassin and Emily Channell-Justice, “Why Putin has such a hard time accepting Ukrainian sovereignty,” The Conversation, December 21, 2021, https://theconversation.com/why-putin-has-such-a-hard-time-accepting-ukrainian-sovereignty-174029.