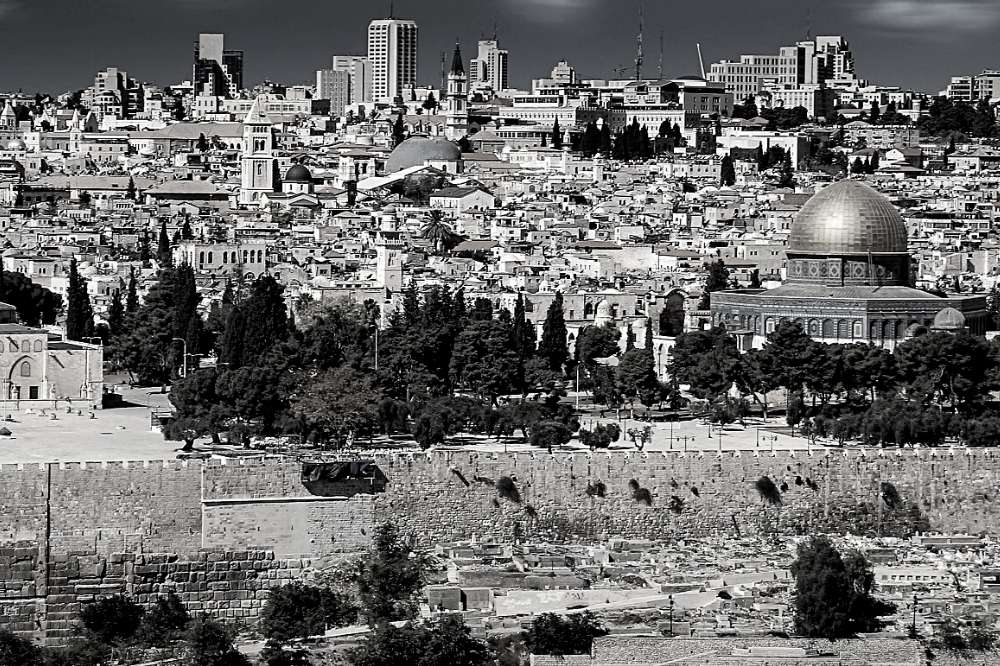 A careful study of Scripture reveals that all the prophecies that are supposed to be fulfilled before the rapture have come to pass. That means the next major event on God’s prophetic calendar is the rapture, which will occur before the tribulation.[1] So from a general standpoint, we can say the only prophecies that remain to be fulfilled are those regarding the end times, heaven, and eternity—that is, everything that will happen from the rapture onward.

Because the rapture is the next event, and because it hasn’t happened yet, it is easy to assume that we are presently in a “quiet period” during which God is not prophetically active.

But that isn’t the case. Right now, there are some important prophetic events that are either continuing to be fulfilled or are ramping up toward fulfillment. These serve as confirmation that, prophetically speaking, God is very active right now. Let’s look at four key examples.

The Evidence That God Is Prophetically Active Today

1. The Prospering of Israel

This first example, the prospering of Israel, falls in the category of prophecies that are continuing to be fulfilled. This one is still unfolding before our eyes. For us to realize its significance, we must first set the historical context.

After Jerusalem was destroyed by the Roman army in AD 70, the Jewish people were scattered among the nations. For the next 2,000 years, there was no Israel—the people were in exile. Yet God promised there would come a day when He would bring them back to their homeland. In Jeremiah 32:37, He said, “I will gather them from the countries which I drove them in my anger and my wrath and in great indignation. I will bring them back to this place.”

At the dawn of the twentieth century—or nearly 1,900 years after the destruction of Jerusalem—a small number of Jewish people caught the vision to return to the land. Over the next few decades, many tens of thousands more came. By the 1940s, serious efforts were under way to reestablish Israel as a nation, especially in response to the increasingly severe persecution of the Jews in Europe. Some six million ended up being killed during the Holocaust. Afterward, those who had returned to their ancient homeland became more determined than ever to resurrect their country—and on May 14, 1948, Israel declared its independence and became a nation again.

This is one of God’s greatest modern-day miracles. For a nation to be scattered for 2,000 years then come back together has never happened before. Only God could have done this.

This brings us to a related promise God made—the one we are seeing continue to unfold today. God said that when the people had “come home” and Israel was reborn, He would make the nation prosperous:

You, O mountains of Israel, shall shoot forth your branches and yield your fruit to my people Israel, for they will soon come home. For behold, I am for you, and I will turn to you, and you shall be tilled and sown. And I will multiply people on you, the whole house of Israel, all of it. The cities shall be inhabited and the waste places rebuilt

Branches will yield fruit, the cities will be inhabited, and the waste places will be rebuilt. At the time Israel declared its nationhood, it was still largely desert and swampland. Today, it is filled with many productive farms and large cities with gleaming skyscrapers. Israel has prospered to the point that it is now one of the most powerful nations in the world. In 2021, US News & World Report ranked Israel at number 11 in its power rankings.

As we look to Israel today, it is a world leader in technology, business, medicine, agriculture, and more. All this from a tiny country reborn in 1948! In these ways and many more, God continues to fulfill His promise to prosper the nation. All this activity has prophetic significance because without Israel’s rebirth, it would be impossible for the prophecies about the end times to take place. That’s because Israel is the primary stage on which the last days will play out.

2. The Plans to Rebuild the Temple

It’s probably no exaggeration to say that one of the biggest events of the entire tribulation period will be when the antichrist enters the Jewish temple and commits blasphemy against God. This will mark a major turning point, for it is at this time that the antichrist will claim total authority over all the world. He will take “his seat in the temple of God, proclaiming himself to be God” (2 Thessalonians 2:3-4). In doing this, he will demand the allegiance of every person on planet Earth.

Daniel 9:27 reveals this will happen at the midpoint of the tribulation. When Jesus taught on the end times, he repeated Daniel’s prophecy when He spoke about “the abomination of desolation” (Matthew 24:15). Jesus said this abomination will happen “in the holy place,” which refers to the most sacred room in the temple.

Daniel, Jesus, and Paul all prophesied that the antichrist will defile the temple. But as of now, there is no temple on the Temple Mount in Jerusalem. For these prophecies to be fulfilled, a temple must first be built.

Presently, an Islamic shrine known as the Dome of the Rock stands where the ancient first and second temples once stood. This means it’s impossible to rebuild the temple in the same spot where the others were. We have no idea how God will clear the way for the temple to be rebuilt, but we can be confident that God is preparing for that to happen because of the enormous amount of activity by Jewish groups that are putting everything into place for the next temple to become reality.

One of the most prominent of these groups is the Temple Institute. Over the past several decades, the scholars, researchers, engineers, and artisans associated with this institute have created architectural plans, temple furniture and implements, and special clothing for the priests to wear. They have also trained up a new generation of priests to carry out the work done by their ancient predecessors.

The preparations for a new temple have reached such an advanced stage that very little remains to be done. The key hurdle now is the Muslim presence and structures on the Temple Mount. Even so, we can be certain that the temple will be rebuilt—because God said it will. The numerous preparations being made today are visible signs that God is at work, putting the pieces into place that are ramping up toward a future fulfillment.

3. The Forming of the Ezekiel 38 Coalition

Another ramping-up event is that the nations listed in Ezekiel 38:2-6 are becoming more and more connected with one another. In Ezekiel chapter 38, we read that there is coming a day when the countries named in verses 2-6 will form a powerful military coalition and attack Israel from the north. Through careful study of this passage, Bible scholars have identified these nations as Russia, Iran, Turkey, Sudan, Libya, Algeria, Tunisia, and some others in the central region of Asia.

We know this war is still future because until recently, most of these countries have not had significant ties with each other. They’ve never formed a coalition before. But today, Iran enjoys very close relations with Russia, and those two nations, in turn, are also expanding their interactions with Turkey. One of the newer relationships is that between Turkey and Algeria. These new and growing connections are paving the way for the coalition to become reality.

Especially significant is that these partnerships include a lot of military cooperation. All this increased activity between these nations—most of which are Islamic, and thus are enemies of Israel—indicates we are drawing closer than ever to the fulfillment of the attack described in Ezekiel 38.[2] Again, God is putting the pieces into place for a future fulfillment.

4. The Global Stage-Setting for the End Times

Again, because the rapture has not happened yet, it’s easy for us to assume that from a prophetic standpoint, all is quiet. While it is true that the rapture will be the trigger that suddenly unleashes the fulfillment of a torrent of end-times prophecies over the course of the tribulation, there is a lot of prophetic stage-setting taking place all over the world right now.

Consider the enormous amount of preparation that takes place as a wedding approaches. The wedding doesn’t just happen spontaneously on the day that the groom and bride become married. Many months of hard work go into planning all that is to happen during a wedding from beginning to end. Likewise, God is orchestrating innumerable details—on a global scale!—and coordinating them so that everything He says will occur during the end times will take place in the exact way and order He ordained.

The Certainty That God Will Fulfill His Promises

The amount of ramping up that is taking place worldwide is far more than we could ever imagine. There are so many people and events that God must put in the right place at the right time. And everything will unfold exactly as God has promised. As He says in Isaiah 46:11, “I have spoken, and I will bring it to pass; I have purposed, and I will do it.” What God has said will happen will happen. And we who are alive today have front-row seats that allow us the privilege of watching God set the stage for what is to come.

[1] For a detailed scriptural study that explains how we can know that the rapture precedes the tribulation, see Ed Hindson and Mark Hitchcock, Can We Still Believe in the Rapture? (Eugene, OR: Harvest House, 2017), pages 105-109. This material from Hindson and Hitchcock’s book has also appeared in a previous post on the Harvest Prophecy HQ blog and is titled “The Differences Between the Rapture and the Return.”

[2] Prophecy scholar Ron Rhodes says he believes “the invasion will likely take place sometime after the rapture but before the beginning of the tribulation period” (Ron Rhodes, The End Times in Chronological Order [Eugene, OR: Harvest House, 2012], 76). Prophecy scholar Thomas Ice agrees, saying it will occur “during the interval of days, weeks, months, or years between the rapture and the start of the seven-year tribulation” (Thomas Ice, “Ezekiel 38 & 39 [Part 1],” Bible Prophecy Blog, January 6, 2011, https://www.bibleprophecyblog.com/2011/01/ezekiel-38-39-part-1.html).